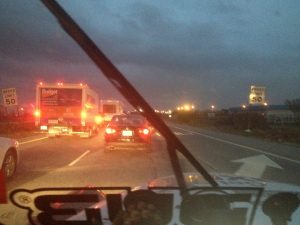 Apologies for the delay with the blogs. We’re actually in the Ukraine at the moment, but we will catch up with the blogs in a linear manner over the next few weeks…

The expedition will come to an end in London on the 12th of May. If you’re about and would like to come down, please do, the Facebook event is here

We left Houston for New Orleans late, and plodded along in our two car convoy. Although Hannah was slower than all the traffic, Margarita, much faster with her totally unnecessary 4.3litre V8, had the handling of an ocean liner missing its rudder. American cars’ handling can be a little weak at the best of times, but Margarita’s steering arms desperately needed realignment, turning over taking trucks into a terrifying, adrenaline filled adventure. The road into the city cuts across straights of deep marsh and swampland. Dead trees loomed eerily in the dark, and save for the well-lit interstate filled with trucks, it was a pretty creepy introduction to the American heart of voodoo.

Sleeping in the cheaper outskirts at a run down motel complete with green, algae filled pool and a Chinese owner with no English, the French architecture had started to creep in already. Gone were the cowboy boots and over sized… well, everything of Texas, as the Creole vibe entered.

The banks of the Mississippi

Splitting up, some of the group checked out the centre of the city and I went to track down my great uncle who emigrated there 30 years ago. We had a great day, he regaled me with stories of how he kept getting into trouble in the Air Force and when he used to work for a Mafioso running party flights to Mexico as I ate Po’ Boy sandwiches (fried shrimp baguette- amazing!)

New Orleans isn’t a city for the daytime; it’s all about the night. Getting ready, we told Matt and his Girlfriend, Leah, that we will be going out in cowboy fancy dress (we had all purchased in Houston) and to meet us at the world famous ‘House of Blues’. They turned up in full cowboy outfits to find we had saved the front row of a comedy show and sat in jeans and T shirts, in fits of laughter at the prospect of the stand ups unleashing their wit upon them… 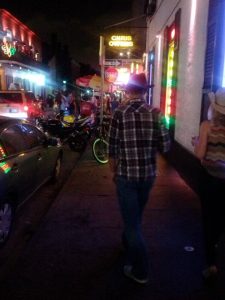 After some cracking comedians, we had a chat with them after and asked if they wanted to come drinking with us. Being stand up comedians, they were ever so willing and we headed to the main drag to find it loaded with drunken basketball fans, clutching giant green tumblers of cocktail and kids throwing up on their shiny Nikes. Feeling this not really our kind of thing, one of the comedians took us walking for miles around the city to find his local hang outs. Although Katrina devastated much of the city, ‘N’orleans’ centre is still filled with old, wooden French buildings. Moldy with the damp air, shiny plastic beads still hung from every tree after being thrown around during the recent Mardi Gras; the city oozes coolness, culture and individuality unlike any other city we had been to in the States.

There’re all sorts in N’Orleans

Bourbon on the rocks, please”

We met more comedians on another tour, drank bourbon and cruised from incredible live music venue to the next. Blues three piece, jazz quintet, big band 30’s ensemble and an incredible blues man with a lapsteel guitar. Unsurprisingly the company was also mainly hilarious, but it was fascinating to see how some of the comedian’s outgoing stage persona was completely different from their real selves.

However time was ticking, our shipping out of the States was booked and we also had an interview with Fox in Orlando three days away. Nursing our heads the next morning, we headed to Memphis. 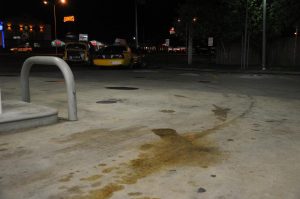 Hannah had an accident

It’s quite a long drive, and our fuel pump fell off half way through, leaving a trail of diesel for 40 miles. An hour of roadside repairs and again we arrived at night. However, we hadn’t arranged anywhere to sleep, figuring if we couldn’t find a cheap enough hotel we would drive out of the city and camp and sleep in cars. Memphis is the birthplace of so much music (Johnny Cash, Carl Perkins, Roy Orbison and Jerry Lee Lewis all got their break in Sun Studios, and, of course it’s where Elvis is from). One street, Beale St. dominates all of this, busy with people. We headed straight for the only free bars playing music and watched a rockabilly band tear up a room full of teachers on a night out. People were dancing and the atmosphere was incredible; all done under a huge neon sign saying ‘Liquor’. Jon bumped into a university colleague, who offered us up his living room for the six of us to sleep on and we all headed next door to a bar where two maestros duelled pianos. 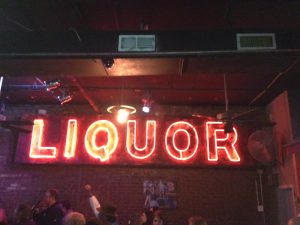 What better to soak this all up with than the world’s best fried chicken the next morning. The queue was huge, but we were happy to sit in the sun and wait. It was the world’s greatest, after all. Served up on white plates among many a Blues Brothers reference to “four fried chickens and a Coke”. It was great chicken, but then it was just fried chicken, how different can you make it? (Although I would never utter this at the time with the mildly obese faithful sat in our vicinity!). Jon made off with Matt and Leah for Florida, they had to be back by the Monday for her to work. It was a sad goodbye, Matt had been with us on the expedition for 6 weeks from Nepal to Laos, then all the way from San Francisco (although we never technically invited him…) and he would be moving to Australia to be an airline pilot before we returned to the UK.

Good evening. I’m Ron Burgundy and here’s what happening in your world tonight.

The local news had got in touch and asked for an interview, so we went along and met the most incredible Ron Burgundy parody before trying to blag our way into Graceland, Elvis’ home. Jon is a very well behaved guy and always tries to avoid trouble, but as soon as he left, we were back to our old tricks. Apparently the security men at Elvis’ house do not like it when you ignore them and drive up and park in front of the house. Fortunately they accepted the stupid tourist excuse for long enough to get a picture. Not really Elvis fans, and not feeling too popular after that, we got on the road.

Graceland… we were just leaving 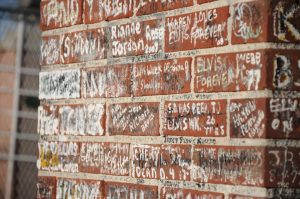 The three of us on the Get Taxi It’s on the Meter Expedition all met at university in Birmingham in England, so we had to visit Birmingham, Alabama. We were meeting a Couchsurfing host at a babyshower she was arranging… in a bar!!!

We had been on the road for two weeks of solid driving, partying, sightseeing and interviews. We had only slept a few hours a night and were looking forward to a chilled evening. Allison was an absolute hero though and had different ideas, she took us to the keg she had out back, introduced her dog and we hung out in a hipster bar in one of the most hick cities in the world. Desperately tired, we didn’t get to bed until passed 4am, We had to an interview at 9am and that night the clocks went forward an hour…

No worries though, it was 14 hours to Orlando, loads of time to catch up on sleep!

Next up: we lose yet another team member, we go to Canada, NYC, I turn 25 and we become internet poster boys (for being jobless and homeless…)